Ms. Frost  A world of biology.....
Understandings:
• Most ecosystems rely on a supply of energy from sunlight.
• Light energy is converted to chemical energy in carbon compounds by photosynthesis.
• Chemical energy in carbon compounds flows through food chains by means of feeding.
• Energy released from carbon compounds by respiration is used in living organisms and converted to heat.
• Living organisms cannot convert heat to other forms of energy.
• Heat is lost from ecosystems.
• Energy losses between trophic levels restrict the length of food chains and the biomass of higher trophic levels.

Guidance:
• Pyramids of number and biomass are not required. Students should be clear that biomass in terrestrial ecosystems diminishes with energy along food
chains due to loss of carbon dioxide, water and other waste products, such as urea.

International-mindedness:
• The energetics of food chains is a factor in the efficiency of food production for the alleviation of world hunger.

• The distinction between energy flow in ecosystems and cycling of inorganic nutrients should be stressed. Students should understand that there is a continuous but variable supply of energy in the form of sunlight but that the supply of nutrients in an ecosystem is finite and limited. 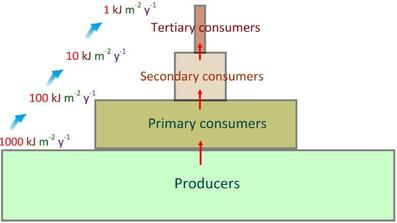